The North Carolina Museum of Art began planning for the M.C. Escher and Leonardo Da Vinci exhibition in the fall of 2014, and after learning about Betabox, they were immediately interested in having the mobile makerspace at the launch of this rare exhibition.
We collaborated with the Museum staff and team members and helped develop a schedule for how the Betabox could be an integral part of the exhibit. With all of the inventive workshops and technology, there were dozens of possibilities for ways to blend Betabox and the innovative works of M.C. Escher and Leonardo Da Vinci.
As the exhibit launch neared, Betabox Program Director Meredith Ingrassia collaborated with NCMA and to help coordinate “Cocktails, Craft, and Camaraderie,” an evening event featuring liqueurs from Durham Distillery, 3D printed accessories from Project Runway finalist Justin LeBlanc, 3D printed jewelry from Cynthia Deis from Ornamentea, and the Betabox Open Makerspace.
In addition to this opening launch event, Betabox also allowed college students from NC State, UNC, and Duke the opportunity to engage with M.C. Escher’s work by prototyping at NCMA’s College Night. The next day, families and teacher’s alike visited Betabox for a family prototyping event and a teacher’s Design Thinking Workshop. 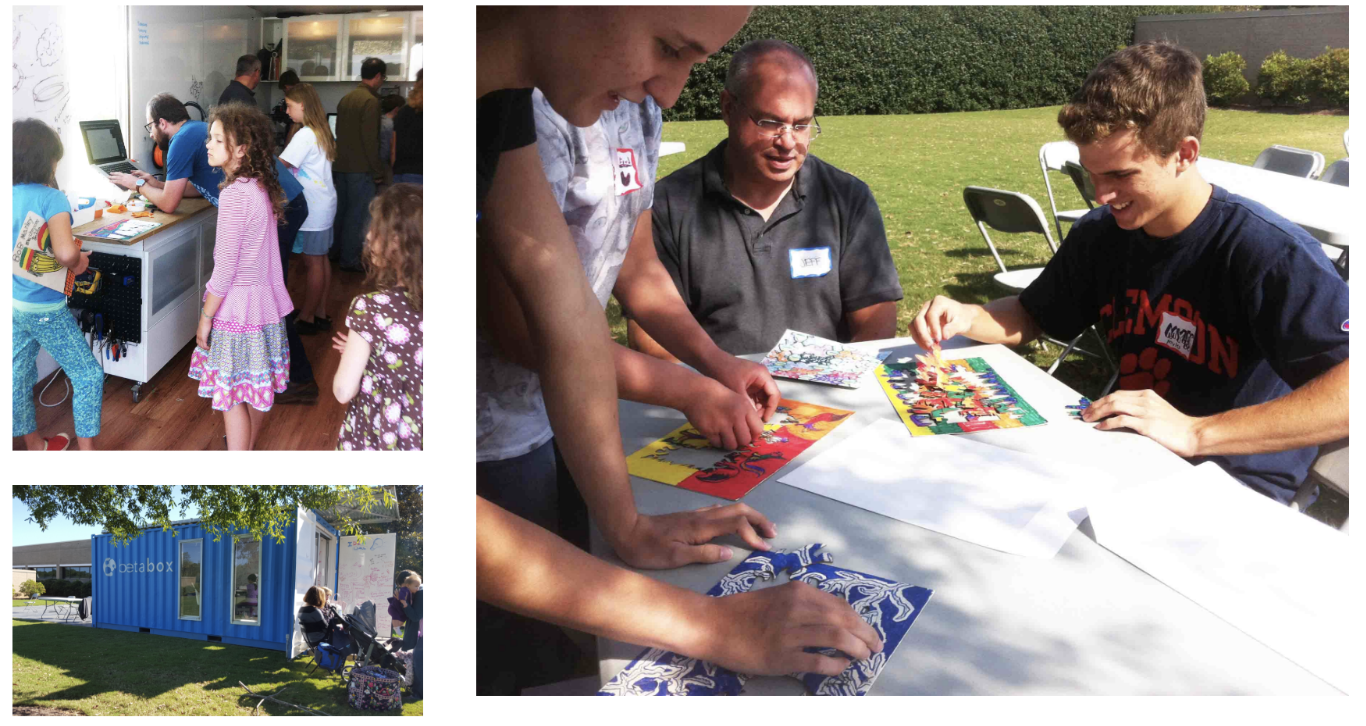 Students and families flocked to Betabox and drew chalk tessellations on the sidewalk using laser cut templates of M.C. Escher’s work. The Betabox allowed visitors to replicate the artwork of M.C. Escher and Leonardo Da Vinci with 3D Printing, Laser cutting, and 3D scanning. These tools gave students, families, and educators a new perspective on already well-known pieces of art, and gave visitors the chance to laser cut earrings, necklaces, and decorations based on Escher’s work.
With Betabox, the North Carolina Museum of Art found a way to take engagement with patrons and guests to a new level: Letting visitors interact with the exhibition through learning-by-doing and hands-on exploration.

“Families were universally pleased with the project and each thanked me personally for bringing BetaBox to the NCMA campus. It was a unique experience for some of our regular families and the program also brought new participants specifically because of the multidisciplinary approach and connection to technology.”
North Carolina Museum of Art Staff