A month ago, Betabox had the fortune of heading down to beautiful Mt. Pleasant, South Carolina, located just outside of Charleston for a one of a kind adventure. Ready with our wildly popular Self-Driving Cars Quest, Betabox led a group of 20 rising freshmen into an immersive four-day, all-female STEM Camp.
This experience marked the unveiling of something we’ve been working long and hard on: Betabox Quests. These project deep dives not only provided prolonged exposure to the technology but also revealed an opportunity for students to form meaningful, genuine relationships with our Guides and each other. 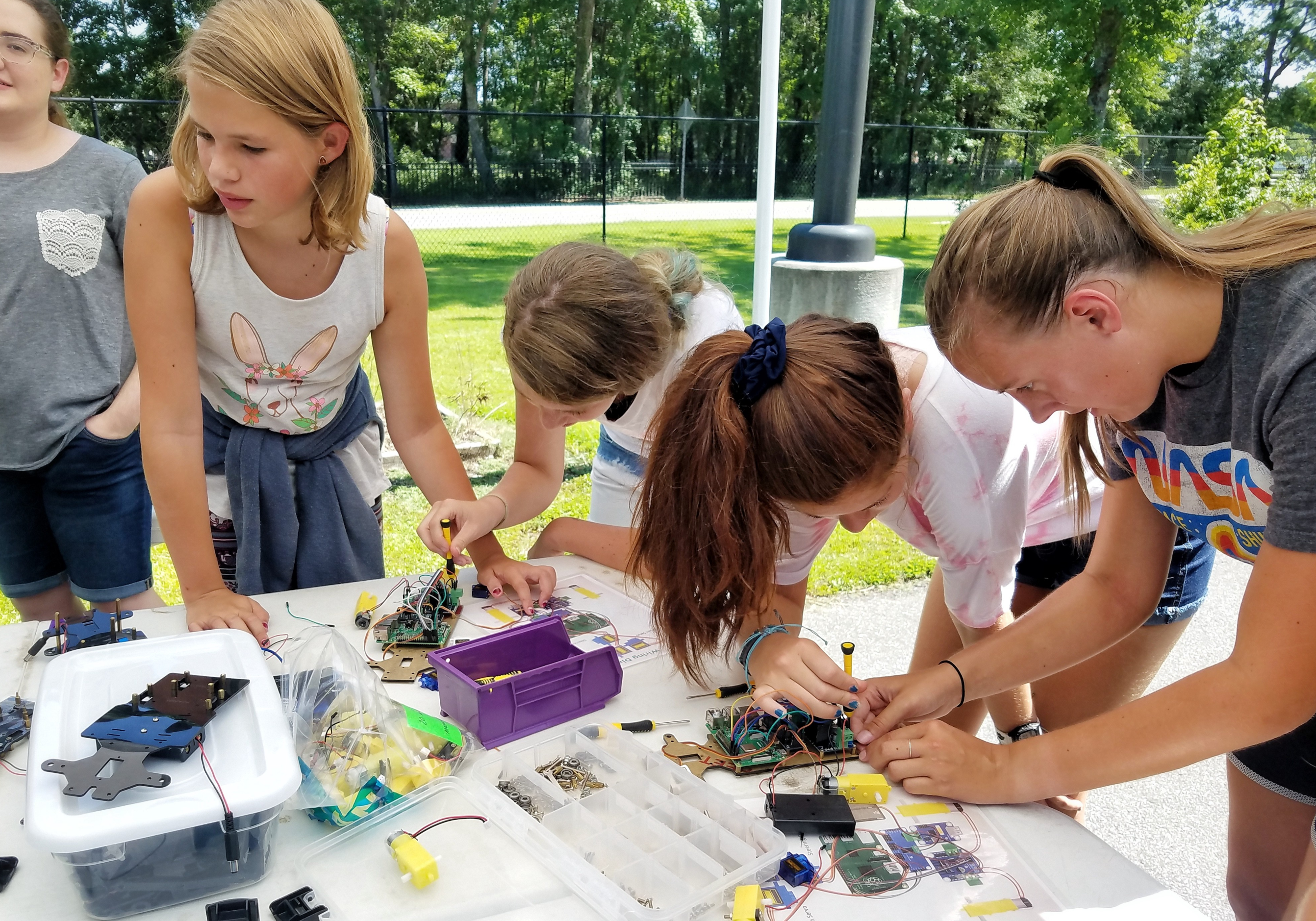 “At the sound of a buzzer, the students were ‘off to the races’ (pardon the pun) ripping open their car kits, counting inventory, and starting their project planning notes.”
The Quest
What are Betabox Quests, you ask? A Betabox Quest is a hands-on learning activity that educators can facilitate in their classrooms with the support of our online learning materials and lesson plans. For this first one, our Guides ended up providing the facilitation.
Our Self-Driving Car Quest gives students the chance to couple hands-on learning with pedagogy in three major branches of engineering: mechanical, electrical, and computer science. By the end of the week, each camper would have constructed a functional, autonomous car using her gained knowledge.
Let’s dive in and learn what the campers did during their Quest. 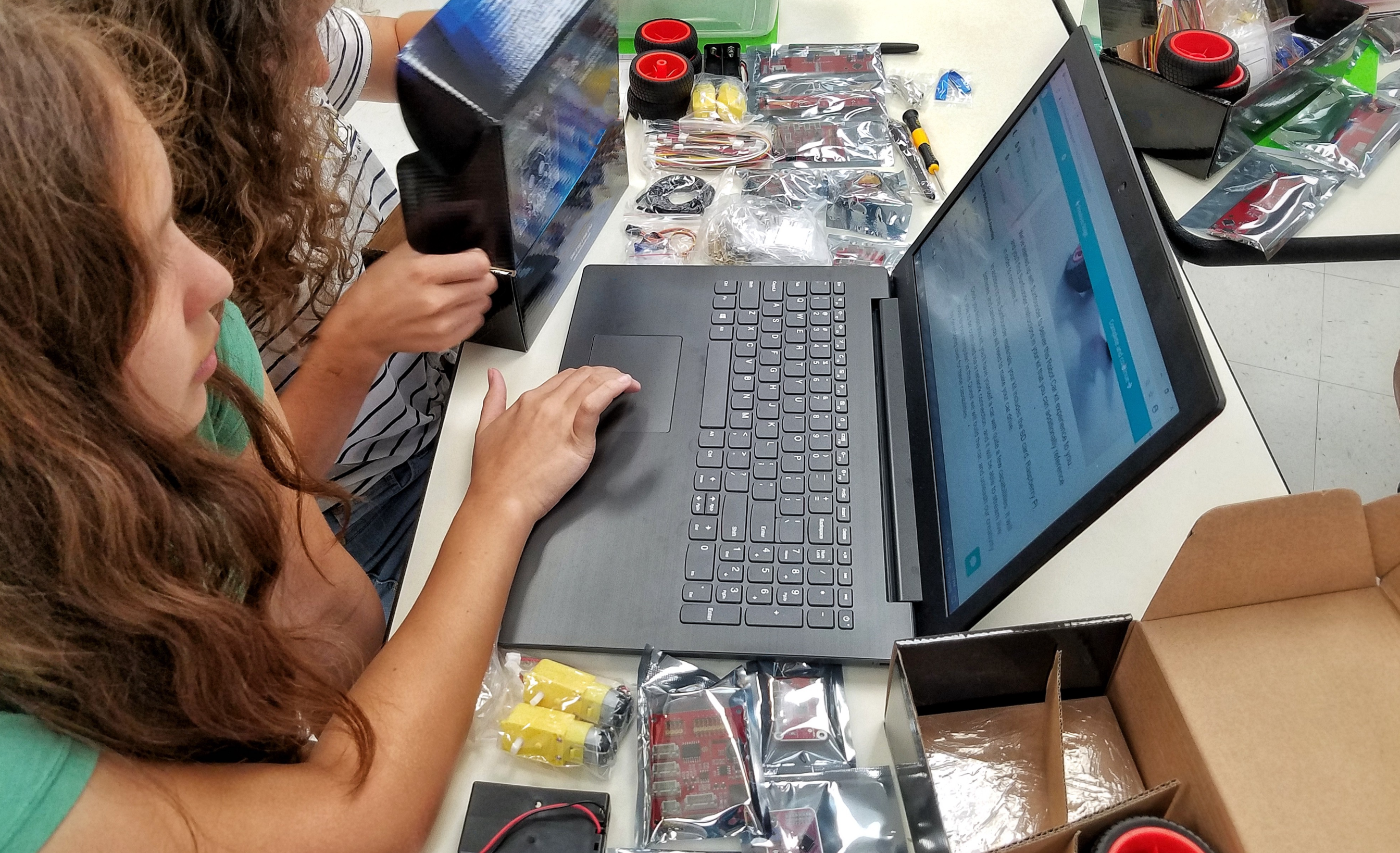 Day 1 — Off to the Races
We began Day 1 bright and early with introductions, a brief overview of the week, and a lesson in project planning followed by a list of clear objectives. Their mission: to fully assemble, wire, and code their cars using nothing more than their kits, teamwork, and Betabox online Quests. As we explained the objectives, a slight sense of apprehension was growing in the room. While some of the campers were eager to get started, others murmured phrases like
“I’ve never done anything like this before.”
“Are we going to do this all by ourselves?”
Their doubts were understandable as this version of our Self-Driving Car field trip is one of our more challenging endeavors, however, we used this time to discuss overcoming adversity and how perseverance would factor in for the upcoming days.
Laptops were handed out and each student individually enrolled into our Betabox Learning Hub to access the Quest modules. Then, the students and their partners went through a self-guided set of step-by-step instructions detailing the processes for car assembly. At the sound of a buzzer, the students were “off to the races” (pardon the pun) ripping open their car kits, counting inventory, and starting their project planning notes.

After a successful first day of mechanical engineering, the girls wrapped up with submitting entries in their reflection journals.
While this practice may seem odd to some, it’s actually an important part of the overall learning process as it serves multiple purposes. Journaling reinforces what was learned in that period and gives students a way to track and monitor their progress. It also helps identify problems in the current session so they can prepare for the next.
Day 2 — Gaining Traction
Day 2 picked up where the girls left off in assembling their car kits. Much to our surprise, not only were they moving through the course with relative ease but they were doing it at a much faster pace than we anticipated. This is really a testament to the sharpness and aptitude of the group as this has proven to be one of our more challenging projects. While we encouraged the campers who finished early to move on to the wiring section, many of them opted, instead, to hang back and assist their peers who were further behind or stuck in a trouble area. It was during this time that you could really see the formation of strong relationships starting to take shape. 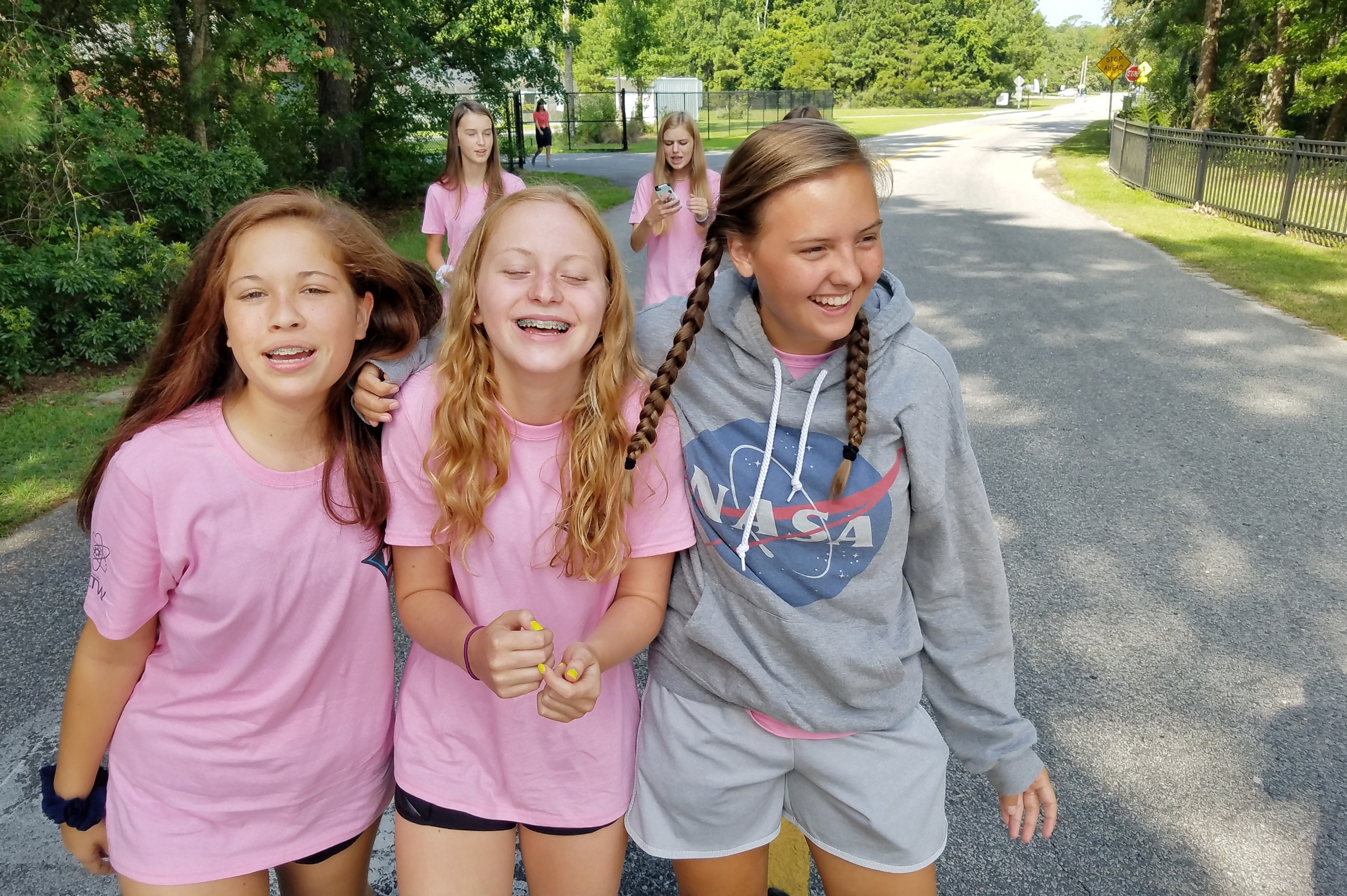 After a brief break for lunch, we resumed with finishing the wiring components while emulating the duties an electrical engineer might perform. Early afternoon consisted of the ladies watching a series of short videos on algorithms, sensor technology, and the science behind self-driving cars. This was shortly followed by a roundtable-style discussion in which we talked about some of the ethics developers and engineers alike must consider when inventing these things. Once again, the ladies ended the day with writing new entries in their journal before heading home for the day.

Day 3 — Headwinds
Now that the cars were fully assembled and wired, it was time to personalize them. The students enrolled in our Tinkercad Quest where they learned how to use a 3D modeling program to design their own hood ornaments. These digital models were then physically realized by manufacturing them with 3D printers, layer by layer.
After this, It was time to move to the final component: networking and programming the cars to perform the self-driving aspect. Before we could begin coding, we had to configure each car so that it was ready to receive the code. When we initially gave the lesson on perseverance and overcoming adversity we had no idea the instructors would also have to deal with that as well. Without getting too technical, a slight monkey wrench had both myself and our Technician assisting the campers during much of this phase. Fortunately, the girls were so far ahead that we were able to get everything resolved and back on our original timeline. Though a bit more stressful than predicted, the cars were ready for their final tasks. 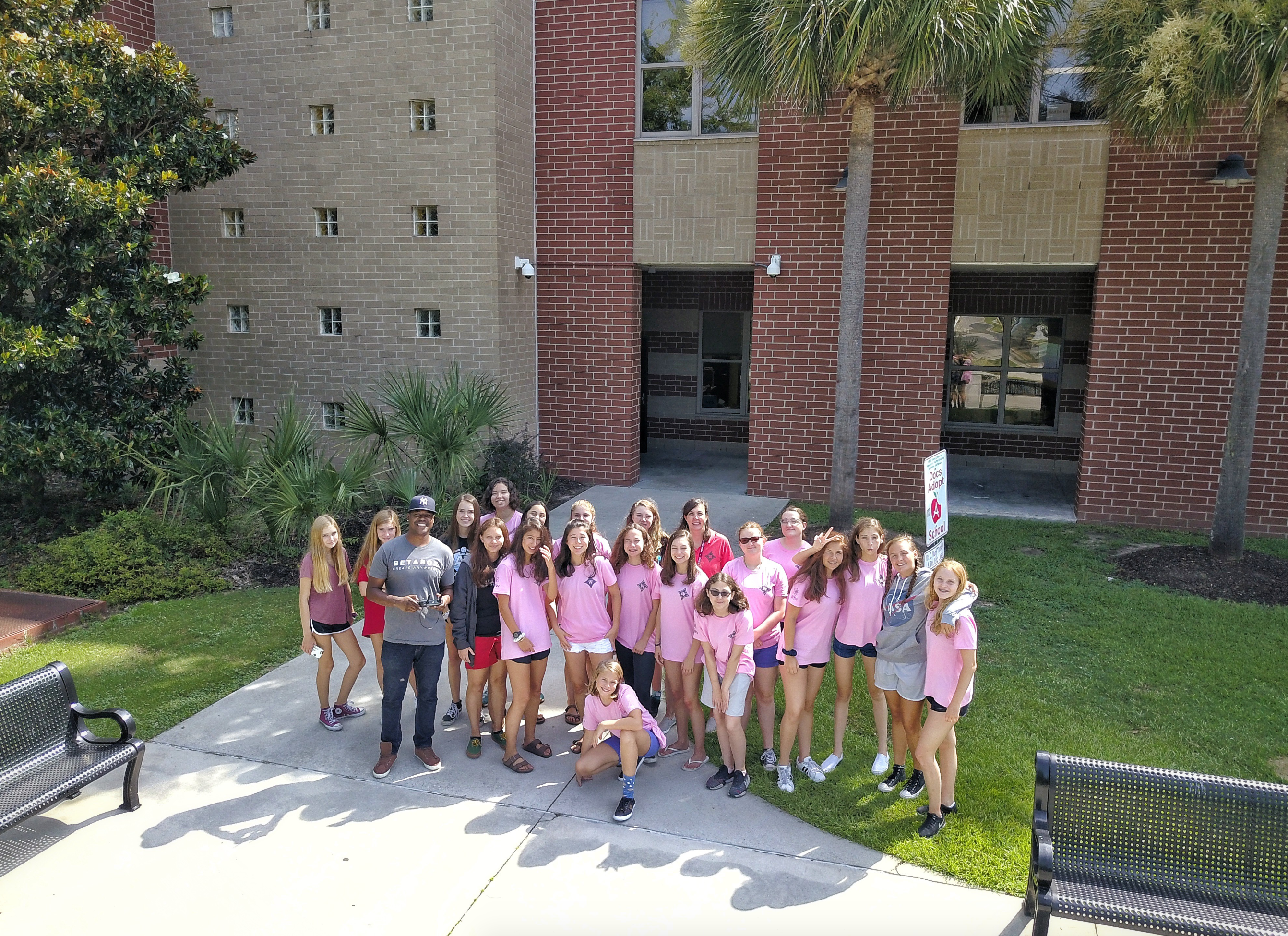 “As time wound down the halls of Wando High began to fill up with high-level executives, district VIPs…”
Day 4 — Challenge Day
After three days of diligent hard work, sweat, and possibly a few tears from our technician Joseph, it was now time to put the finishing touches on their cars and present our ultimate challenge. The students were asked to team up with someone completely new and use a coding program, Dragit, to begin coding their cars with algorithms to maneuver a predetermined course. The pairs would have exactly 90 minutes to come up with the correct set of instructions to have their cars drive a two-challenge course that we set up. The teams were judged on:
a) accuracy
b) time
The teams that had their cars complete the courses the fastest and/or with most accurately would be declared the winners. 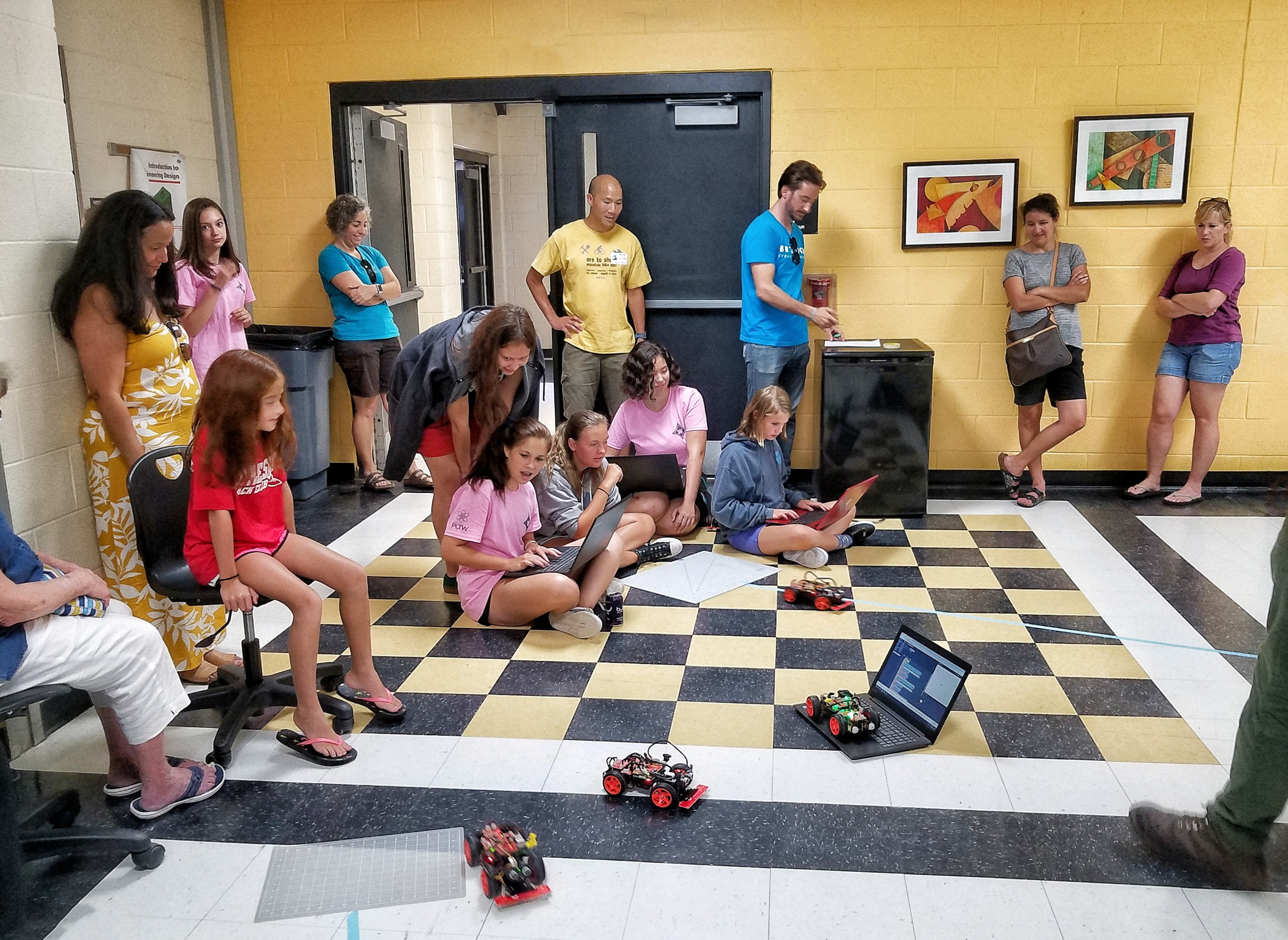 Anticipation and excitement filled the air as teams scrambled to get their code running. As time wound down, the halls of Wando High began to fill up with high level executives, district VIPs, and even a drop-in visit from Betabox founder, Sean Maroni, acting as the official judge. Parents also began arriving to see the finished products of their daughters’ hard work.
At the end of the races, the girls would make their final reflections in their journals. The week culminated in an award ceremony announcing winners and congratulating all for a job well done.
By all standards, the week was a success. Each camper produced a functional car that was capable of completing both courses. Not only did the girls take their finished projects home with them to complete an optional Line Follower Quest, but they obtained confidence in knowing that they, indeed, can accomplish a project of this magnitude. They persevered through metaphorical and physical obstacles and while facing adversity with gusto.

What “making” is all about
As the ever-growing world becomes more reliant on technology, it becomes imperative that there is diversity in engineering fields. By and large, female scientists are still underrepresented in STEM careers. Betabox is proud to be doing our part in providing hands-on, supportive and engaging environments for future women in science. If you’re interested in learning how to include our self-guided Classroom Quests into your curriculum, please reach out to us at greg@betaboxlabs.com or hello@betaboxlabs.com; we’d love to hear from you.